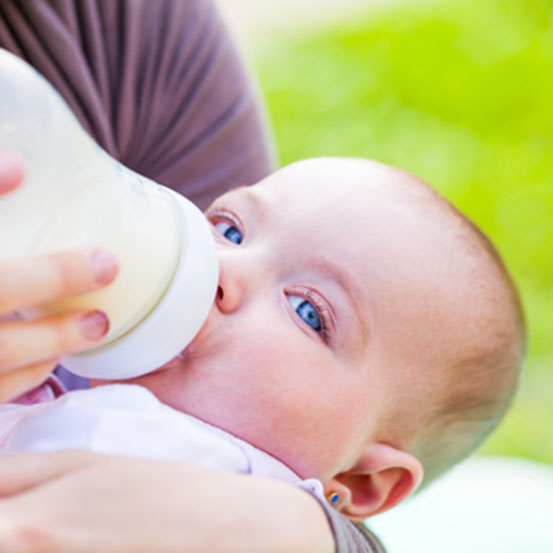 Are you thinking of feeding formula for your little one? When shopping for infant formula, you will find several basic types. Here are just a few:

80% of the formula sold today belong in this category. While cow’s milk is the basis for these formulas, the milk itself has been changed drastically to make it safe for infants to digest it. Additionally, cow’s milk formulas have more iron added. The iron-fortified formulas have dramatically reduced the rate of iron-deficiency anemia in infants in recent decades. Iron is a mineral necessary for normal human growth and development, and some infants do not have enough natural reserves of iron to meet their needs. For this reason, the American Academy of Pediatrics (AAP) currently recommends iron-fortified formula for all infants who are not currently breastfed or only partially breastfed from birth to one year of age.

These formulas are often called “predigested,” meaning that their protein has already been broken down into smaller proteins that can be more easily digested. These hydrolyzed formulas tend to be costlier than regular formulas. For infants who have a high risk of developing allergies – for example, because of family history – and who have not been breastfed exclusively for four to six months, there is evidence that feeding them extensively or partially hydrolyzed formulas can prevent skin conditions like eczema or atopic dermatitis. The formula also will help at least 90% of babies who have food allergies, which can cause symptoms such as hives, a runny nose, and intestinal problems.

These formulas contain soy (a protein) and either glucose or sucrose (a carbohydrate) that are different from milk-based formulas. They are sometimes recommended for babies that are unable to digest lactose, which is the main carbohydrate in cow’s milk formula – although lactose-free cow’s milk-based formula is also available. In general, it is rare for babies to have a significant problem digesting and absorbing lactose. When a true milk allergy is present, causing fussiness, failure to thrive, or even bloody diarrhea, the allergy is to the protein in the cow’s milk formula, rather than the lactose. In this case, soy formulas with soy as the protein could be an alternative.

The AAP believes that there are few circumstances in which soy formula should be chosen instead of cow milk-based formula.

These are manufactured for infants with specific disorders or diseases. There are also formulas made specifically for premature babies. Because these may be quite different from regular formulas, follow your pediatrician’s guidance about feeding requirements if he or she recommends a specialized formula for your infant.